My adorable granddaughter just celebrated her first birthday this month. That means that she has now experienced all four seasons of winter, spring, summer, and fall. But instead of identifying seasons by temperature changes, we now refer to them as the seasons of hurricanes, tornadoes, wildfires, and floods.

In 2018 the United States was impacted by some 14 separate billion-dollar disasters. Barely a day goes by where we don’t read about a community’s devastation marking a change of seasons. These natural and manmade forces affect hundreds of communities and millions of people.

If you are an economic developer or an elected official, you believe that the worst thing that can happen to your community is that a primary employer relocates or goes bankrupt, resulting in numerous layoffs. Actually, the worst thing that can happen is the onset of a natural disaster. Many of these events cannot be predicted or prevented. The only control we have is how we identify and prepare for their arrival and how we plan for recovering in their aftermath.

That’s why I wrote Noah’s Town: Where Animals Reign. This engaging, funny, timely and teachable fable tells the story of how the descendants of Noah’s Ark have integrated themselves in society and have formed a sustainable and growing community. When an unexpected disaster strikes, putting residents and visitors in harm’s way, the community must find a way to survive, putting their new disaster plan to the test. 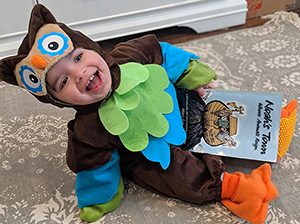 My granddaughter is too young to read or understand the lesson of Noah’s Town. But, like the young, wise owl she is dressed as, I hope that one day she will live in a community that has had the foresight and good sense to plan for the worst while hoping for the best. If this book has served as even the slightest inspiration to a community planner or emergency responder, all my toiling at the keyboard will have been worth it. Well, that and the chance to share more pictures of my adorable granddaughter.

50 ways to Start a Business

Book Review: Our Kids: The American Dream in Crisis

Place Matters: The Role of Place Making in Economic Development

Subscribe to The Maury Forum for monthly updates on grants, resources, and new ideas.

Thank you for subscribing.

We respect your privacy and take protecting it seriously

Subscribe to The Maury Forum for monthly updates on grants, resources, and new ideas.

Thank you for subscribing.

We respect your privacy and take protecting it seriously